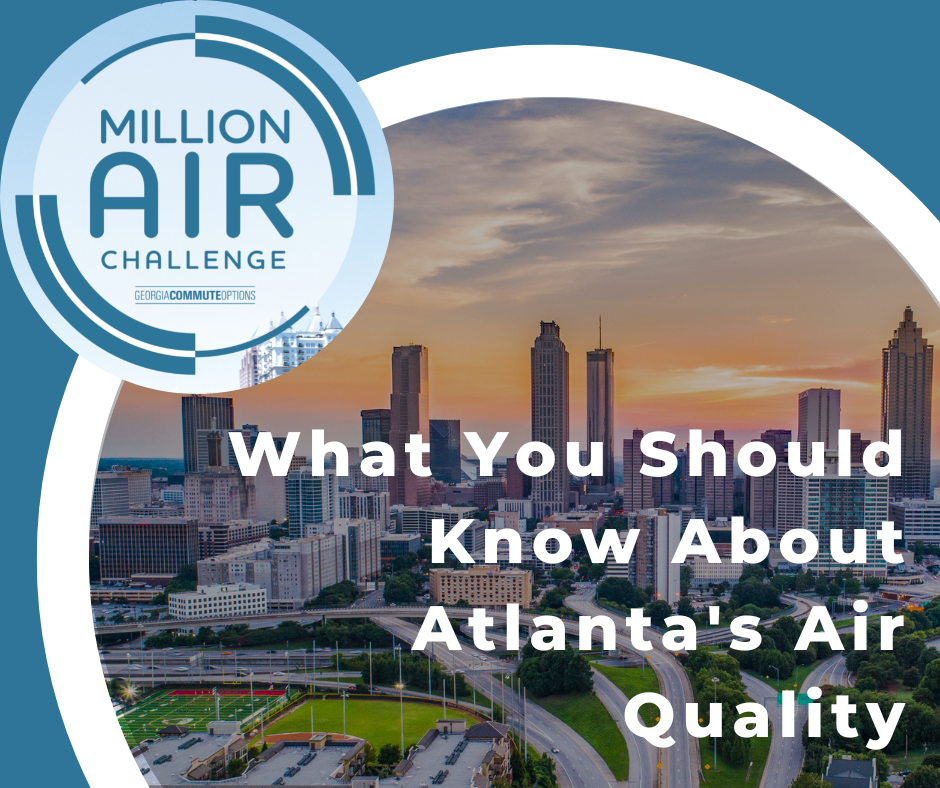 Historically, air quality in the Atlanta metropolitan area hasn’t been great. But that fate isn’t set in stone. In fact, every year Atlanta’s air quality gets a little better, proving that change is always possible.

Here are five things to know about the state of Metropolitan Atlanta’s air quality.

Air-born pollutants can have significant health consequences, especially for children, the elderly, and people with existing respiratory conditions.

Microscopic particles emitted by pollutants can burrow in the lungs or even blood, according to the CDC, while high ozone levels can be damaging to people with respiratory conditions like asthma. Reducing pollution is an important way to help everyone in our community stay healthy.

It’s estimated that Atlanta ranks second nationally for most air pollution specifically from motor vehicles. Collectively, Atlantans drive upwards of 100 million miles a day, and the average daily commute is 34.2 miles, the fourth-highest driving distance in the country.

The 2022 State of the Air report released by the American Lung Association found that Atlanta’s air quality gets a little better every year. During the time frame covered by this report, Atlanta had the fewest ever days of unhealthily high ozone. Particle pollution was also at its best rate ever.

Despite these gains, though, Atlanta still received an “F” from the ALA for ozone pollution levels. The city is on the right track, but there’s still much to do.

4) Air Quality Can Worsen During the Summer

Ozone forms when other pollutants combine in heat and sunlight, so ozone pollution levels go up during the summer. Fortunately, the summer is also one of the best seasons for walking or biking, so Atlantans can mitigate this issue by choosing alternate forms of travel.

5) Getting Vehicles Off the Road Is Important for Clean Air

With so much of Atlanta’s pollution coming from motor vehicles, getting cars off the road is one of the most important things Atlantans can do to help improve air quality. You can do your part—while enjoying spending less time stuck in traffic—by walking, biking, carpooling, or taking transit.

Every year, Atlanta’s air gets a little bit better. If we all work together to get vehicles off the roads, we can keep this trend going.

Perimeter Connects is doing its part to keep our neighborhood’s air clean. Click here to learn how—and see what you can do to help.