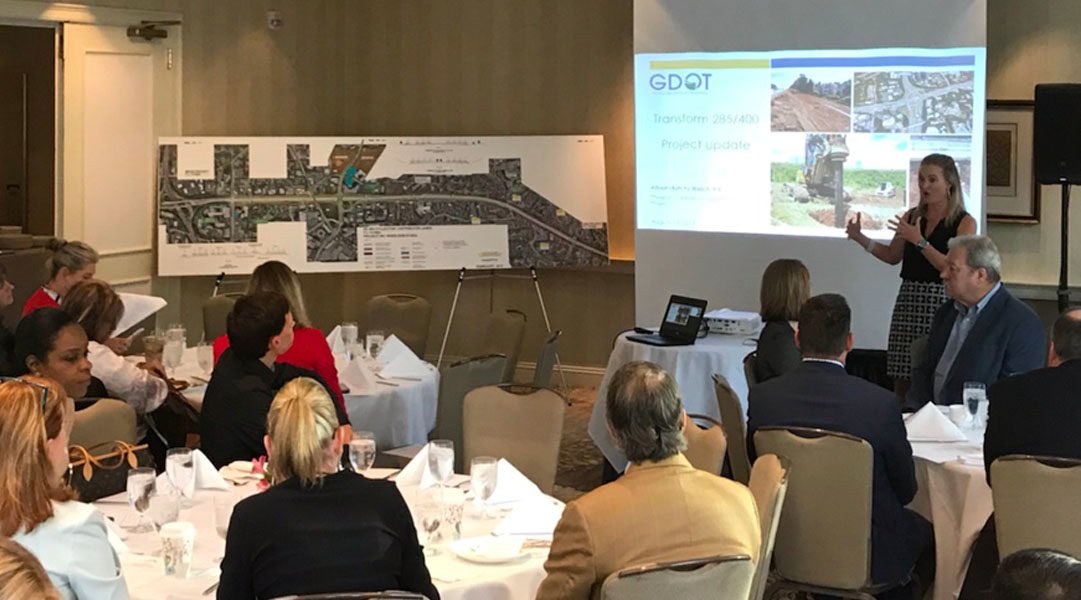 Members from Perimeter’s civic and business communities gathered for the first “Coffee + Construction” event at the Hyatt Regency Atlanta at Villa Christina on Thursday, Aug. 23.


The meeting, programmed by the Perimeter Community Improvement Districts in partnership with Perimeter Connects, is part of a quarterly series aimed at providing important construction updates on major transportation projects slated for Perimeter.

Butch Welch, the Georgia Department of Transportation’s lead Project Manager, kicked off the meeting with an overview of an extensive upgrade to the I-285 at GA 400 interchange.

Over a 4-year coordinated construction period, the Transform 285/400 project will add roadway capacity and improve traffic flow, safety and access. In total, 10.5 miles of improvements will be made to the interchange.

This work is expected to generate new investment opportunities in the Perimeter area. Construction for the project is scheduled for completion in 2020.

Bingaman encouraged Perimeter’s stakeholders to take MARTA’s survey to contribute to MARTA’s expansion efforts. The survey can be accessed at ItsMARTA.com/MoreMARTA

The Perimeter Community Improvement Districts’ John Gurbal and Ann Hanlon updated the group on other projects in the pipeline for Perimeter, including the traffic signal optimization program PTOP, proposed managed toll lanes to GA 400 and on the top end of I-285, and an expanded trail network that would eventually connect Perimeter to Buckhead and the Atlanta Beltline.

Johann Weber, Assistant Program Manager for Perimeter Connects, offered commuting solutions to those gathered, pointing to the successes of area employers and properties who proactively partner with Perimeter Connects and engage effective strategies.

“Traffic is not inevitable,” Weber said. “It’s something we each can move the needle on. Perimeter Connects can work with you to provide services tailored to your company’s needs.”

Interested in empowering your employees or tenants with a better commute? Check out our Connector’s Corner, which has a library packed with commute resources to help you jump start your workplace. You can also encourage your employees and tenants to keep up with construction activity in Perimeter. They can sign up to receive alerts and tips directly in their inbox from Perimeter Connects.

Stay tuned for details for the next Coffee + Construction scheduled for Early 2019.