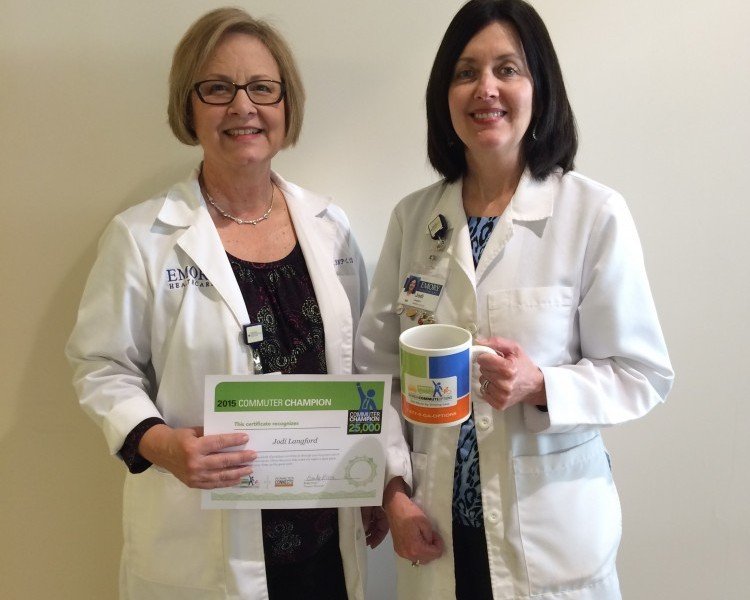 When Jodi Langford realized that one of her coworkers at St. Joseph’s Hospital was driving to work from the same Alpharetta neighborhood, she suggested they try carpooling. That was over five years and 25,000 miles ago, and they still commute together every day.

“It’s more enjoyable to sit in traffic with someone else,” said Langford a nurse and Education Specialist. “We use our commute time productively to discuss and problem solve work issues.” Her carpool partner is Karen Robinson, who works on the 6th floor unit with Langford.

The two take turns driving, and discuss their schedules at the beginning of each week. Langford said it only takes a little extra effort to carpool, but the benefits are more than worth it. “Not only are we saving money, but also the wear and tear on our cars. It’s also nice to take turns driving. One of us is the pilot, and one is the copilot who helps navigate around the traffic.” Another perk is that the passenger gets dropped off at the front door, while the driver parks the car. “It’s a nice way to get a jumpstart your day with an extra 10 minutes that you saved by not looking for a parking space and walking from the parking deck.”

Langford said that she and Robinson work the same 7 a.m. – 3 p.m. shift, and are willing to wait for each other if one has to stay a few minutes past that time.

Langford also takes advantage of the programs offered through Georgia Commute Options. She has won several $25 gift cards, and usually treats Robinson out for dinner with the winnings. At the beginning of this year, she was recognized as Commuter Champion for achieving 25,000 clean commute miles. Georgia Commute Options calculates that Langford has saved over $14,000 by carpooling, as well as keeping over 22,000 pounds of pollution out of the air.