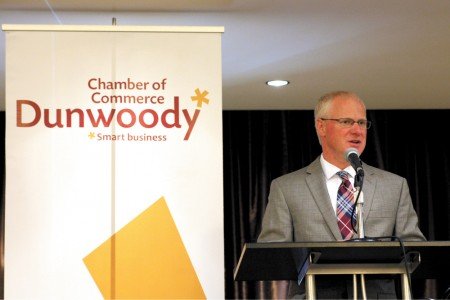 
Warning: count(): Parameter must be an array or an object that implements Countable in /home/customer/www/perimeterconnects.com/public_html/wp-content/themes/vision_wp/template_inc/loop-index.php on line 207

Georgia’s transportation commission says each commuter using the I- 285/Ga. 400 interchange will save eight hours of road time a year once a $1 billion project to ease congestion is completed.

After 20 years, drivers could save 13 hours a year, which translates into money saved, he said.

“Even though traffic will continue to grow, in the long haul, you’ll save more time,” Russell McMurry said to the Dunwoody Chamber of Commerce at a June 23 luncheon.

McMurry was appointed Commissioner of the Georgia Department of Transportation by the State Transportation Board in January. The department’s biggest project is the $1 billion dollar remake of I-285/Ga. 400 that is intended to help alleviate congestion by adding access lanes.

McMurry said a crowd of drivers equal to population of Wyoming passes through the interchange every day. “That’s 500,000 cars a day, but you guys know that,” he said. “You live it.”

Traffic congestion is made worse by crashes, McMurry said. But he predicts the number of traffic tie-ups will fall once the project segregates through traffic from local traffic. “We’re going to markedly improve mobility,” he said.

McMurry and the GDOT have an innovative plan to bring in a private contractor to help finance the project. After the initial 25 percent of the cost, which GDOT will bring to the table, one of four private contractors will be chosen to help “build a better mousetrap at a lower cost,” McMurry said.

Their technical comments will help save the state money, he said. “These are not only the nation’s best but the world’s best contractors that have interest,” McMurry said.

He described the selection process as complex, but said a decision would be made by December. After the spring of 2016, the 51-month project will commence.

One of the most important technical aspects to consider is how to keep traffic flowing during construction. “Our daily lives still have to go on, and we have to move half a million people through the interchange while we’re building,” McMurry said.
McMurry said a “red letter day” occurred recently when the major project got approval from the Federal Highway Administration, which is always the last step. “That means we can now start buying right of way,” he said.

Photo and story by Ellen Eldridge of the Reporter Newspapers