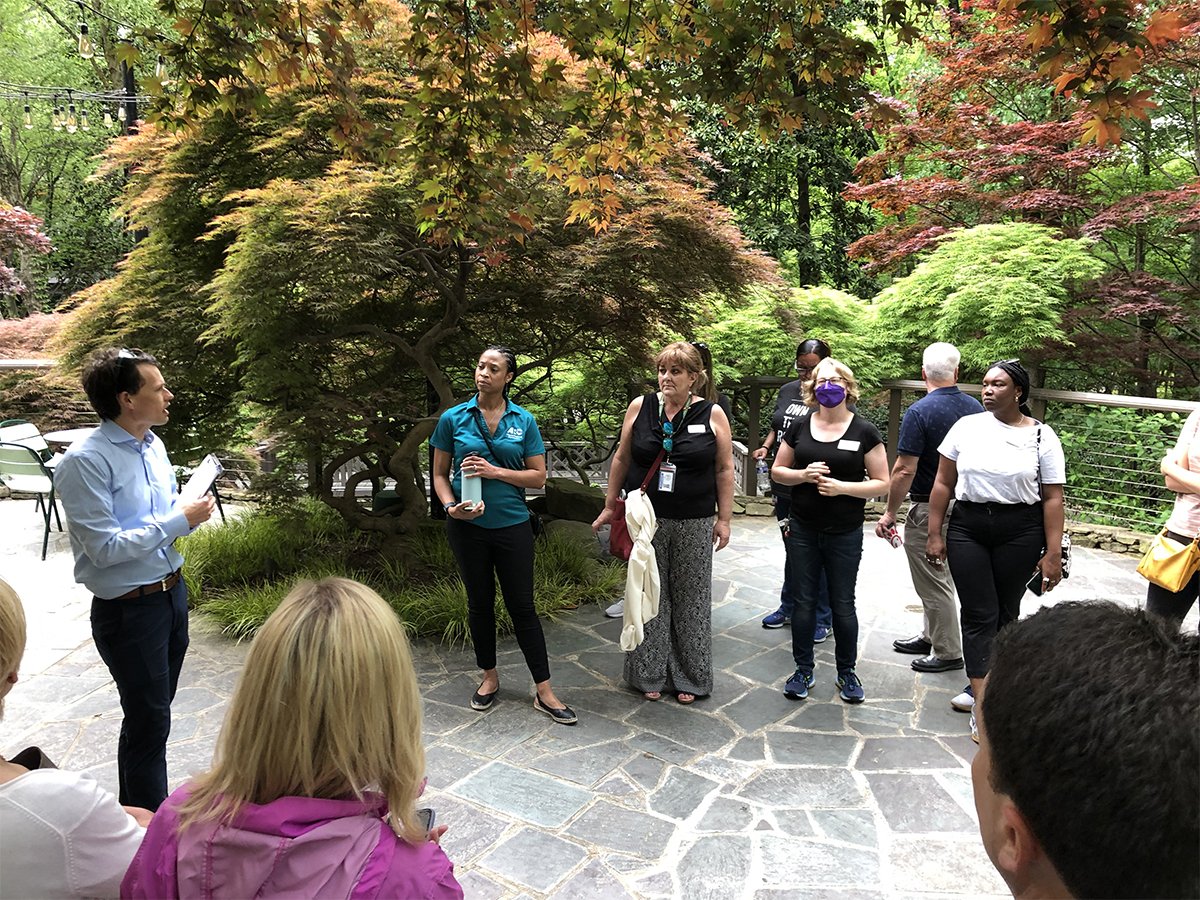 To share this “hidden side,” capture the community’s one-of-a-kind spirit, the Perimeter Community Improvement Districts and its transportation program Perimeter Connects program are hosting a “pop-up walking tour” called “Hidden Perimeter.” This spring campaign, which will run from April 26 to May 31, includes centers around a district-wide installation of more than 50 markers each featuring to help those spending time in Perimeter—from residents to daytime workers to visitors—learn surprising, unique, and historic information about the popular destination area.

“Perimeter is filled with unique places, each with their own stories and history. But those stories and that history aren’t always visible or accessible to the thousands of people who live, work, and visit here,” says Johann Weber, Program Manager of Perimeter Connects. “By taking this hidden side and sharing it with people, we give them the chance to have a more unique and personal relationship with these places. And people will certainly be surprised as they explore Hidden Perimeter.”

Those curious to explore are encouraged to do so by walking, as markers are placed on neighborhood street corners, in office tower plazas, near dining and shopping and more – but always within walking distance of another marker. There are office buildings off the grid, a mythology-inspired lounge, a centuries-old cemetery, and much more. Each marker is enhanced with QR codes – some have something special hidden within them as well, with opportunities to win prizes and discounts at local retailers, including a grand prize giveaway of a one night’s stay at the Westin Hotel Atlanta Perimeter North.

“Our goal with this campaign has been to give our community an opportunity to be intrigued, surprised, and curious – add some beautiful weather and a comfy pair of shoes, and you’ll find this a different perspective on a place you thought you knewwhile enjoying the beautiful Georgia weather this time of year,” says Weber. “We invite our Perimeter neighbors and visitors to get out on foot and get reacquainted acquainted with all the history–and quirks—that make this area a great place to live, work and connect.”

The Hidden Perimeter walking pop-up tour was built developed in partnership with the help of many partners, including in partnership with the City of Dunwoody,  and City of Sandy Springs, as well as the participation from the following neighborhood businesses and community organizations: Dunwoody Preservation Trust,; Discover Dunwoody,; Visit Sandy Springs,; Dunwoody Perimeter Chamber,; MARTA,; Le Meridian,; AC Hotel Atlanta Perimeter, The ,; the Westin Atlanta Perimeter North,Hotel,; Iron Hill Brewery & Restaurant,,; and Local Expedition Wood Fired Grill. Learn more about the pop-up walking tour at www.perimeterconnects.com/hiddenperimeter

Perimeter Connects is a program of the Perimeter Community Improvement Districts (PCIDs). To support Central Perimeter’s vitality, Perimeter Connects provides free consulting services to employers and commercial properties, as well as programs and resources for commuters such as the Dunwoody Station enhancements. Perimeter Connects and the PCIDs implement and partner on transportation solutions that improve access and mobility and reduce congestion. For more information about Perimeter Connects, visit www.PerimeterConnects.com