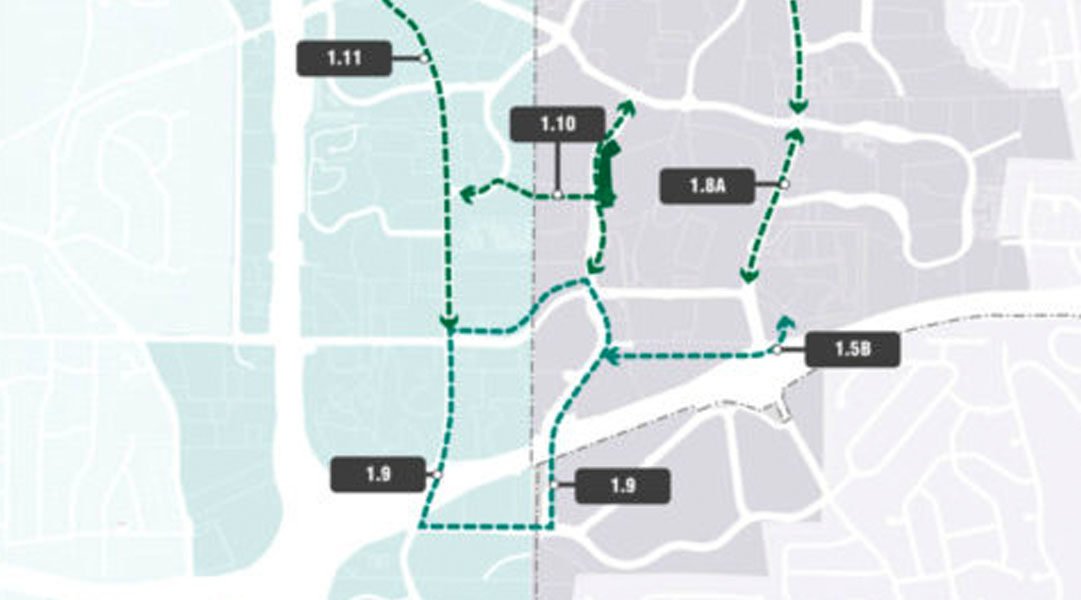 This fall, the Perimeter Community Improvement Districts (PCIDs) is approving a work plan that brings together infrastructure projects planned by the PCIDs; the cities of Brookhaven, Dunwoody, and Sandy Springs; Georgia Department of Transportation (GDOT); MARTA and State Road and Tollway Authority (SRTA). The entire 5-10-year work plan is available here.

In honor of Biketober this October, we want to highlight a few exciting Perimeter bicycle and pedestrian projects in the pipeline:

Running from Hammond Drive north along the western side of Ashford Dunwoody to Perimeter Center West (and eventually all the way to Mt. Vernon), this trail will provide a key, comfortable direct north-south connection and improve access to Perimeter Mall and eventually Dunwoody Village.

A proposed trail extension connecting from the Central Park blocks (home to Cox Enterprises) east toward the Dunwoody MARTA station will add a beautiful, direct east-west connection in the heart of the Perimeter.

A partnership between MARTA, the state of Georgia, Dunwoody, and Brookhaven will make trail access to the MARTA Dunwoody and Medical Center stations possible. The Dunwoody station will be accessible from Peachtree Dunwoody, Hammond, and Perimeter Center Parkway. The Medical Center station will be accessible from Lake Hearn and Peachtree Dunwoody.

A two-way “cycletrack” is planned along Peachtree Dunwoody Road between Hammond and Abernathy, which will provide another key north-south route, connecting to improvements on Hammond and the Cox Trail.

Hammond Drive will see two phases of additional bicycle and pedestrian facilities. These will better connect the many major properties along the street to the Dunwoody MARTA station and to the retail and residential sites.

The multiuse PATH400 trail being developed north of Buckhead will continue to expand north to meet the in-construction segment spanning under i-285 to Peachtree Dunwoody. Eventually, you’ll be able to ride a bike comfortably along the trail from Buckhead all the way north to the heart of Perimeter!