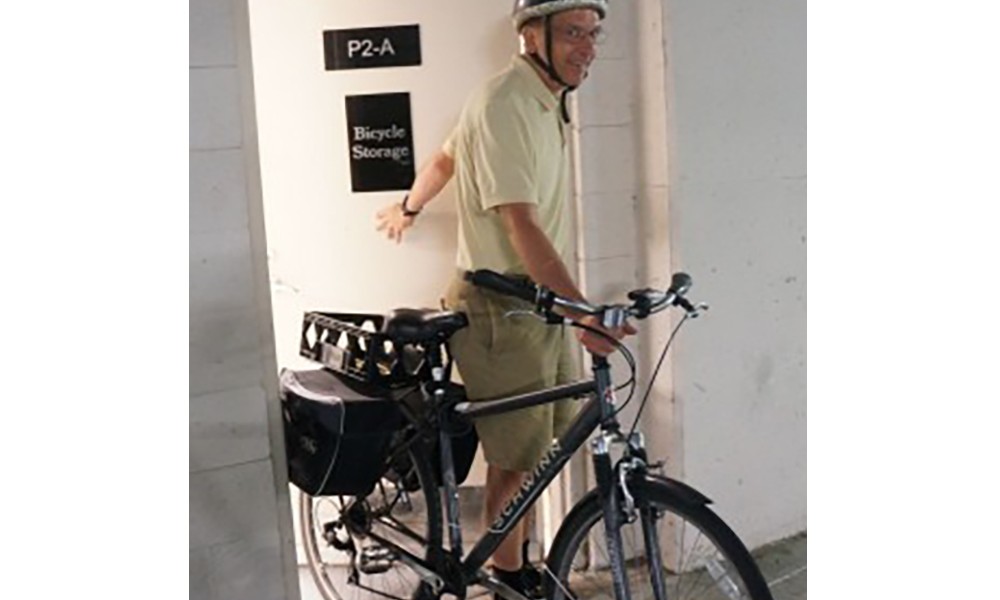 “Why don’t people dump the car and ride the bike? It’s so easy!”  says bike commuter Dan Harris. A Senior Analyst at Verizon Telematics, Dan rides five miles from his home in Chamblee to his  Perimeter Summit office, located near the intersection of Ashford Dunwoody Road and I-285. Last year, his company won the Atlanta Bike Challenge, due largely to his enthusiastic support and promotion effects. “I hung posters in the breakrooms and elevators, sent daily email reminds encouraging people to try it.” The company also sponsored a team building event where they brought in bikes for employees to ride around the campus, with Dan leading all of the rides. “It was better received than I ever thought it would be. We had people in line, waiting to ride.”

The Perimeter Summit building offers a shower for bike commuters to use, and a safe storage area to keep their bikes. “I noticed the building was equipped for biking. I figured I needed to exercise, why not bike to work?” Dan says that it does take some advance planning to use his bike for traveling to office. “I have to schedule my time, get up early, and make sure I have gear with me to repair a flat.” However, Dan says the benefits outweigh the challenges. “I kill multiple birds with one stone. I get my exercise in. And it benefits me at work because I feel energized, not lethargic.”

Dan, who will turn 50 years old in September, considers himself a “practical” bike rider, using his bike to run errands and pick up groceries. He rides a Schwinn hybrid bike outfitted with saddlebags and cargo rack.