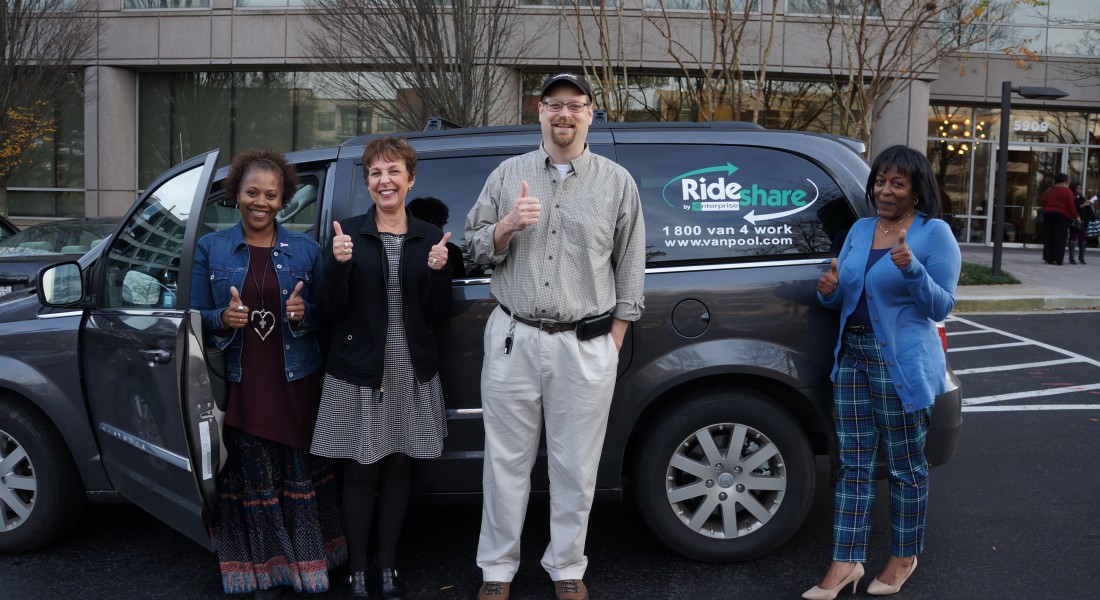 Colleagues Irene Laschuk and Vanessa Jones are not only co-workers, but they also spend every day riding to work together. For the past four years, these employees of Atlanta Center for Reproductive Medicine have vanpooled from their homes in Woodstock to their Perimeter area office.

“It costs about $100 per month for us to vanpool, and it really saves me from putting tons of miles on my car,” said Irene, a Patient Financial Services Manager.

Irene and Vanessa drive separately to a park and ride lot off Towne Lake Parkway each morning, to meet their four additional vanpool members. During the ride, which normally takes about 45 minutes, the vanpoolers read, nap, chat and listen to music. “The only rule we have is that the driver gets to control the radio,” said Vanessa. But that’s never a problem, said Irene. “We all like to listen to the same music. Sometimes we listen to sports or talk radio.” The vanpoolers take turns driving, using the honor system to decide whose turn it is to drive. The vanpool picks up at three nearby offices in the Peachtree-Dunwoody Rd. area of Perimeter. The riders keep in touch through texting, so they can be waiting outside when when the van pulls up. They let each other know in advance if they have to work late or drive in separately and won’t be part of the vanpool. It’s become a smooth routine for all of them, and rarely encounters a problem.

Irene said one of the things that has made vanpooling an attractive way to commute is the new black Chrysler Town & Country minivan, provided through Rideshare by Enterprise. “We love the minivan! It’s easy to drive, comfortable, and every row can control their own temperature,” said Vanessa. According to Rideshare Account Executive Shawn Cook, vans are usually rotated out of the programs after 50,000 miles. “We believe in having our commuters in vehicles that are in top condition.”

For a monthly fee, Enterprise provides vanpoolers with the vehicle, gas card, insurance, maintenance and a PeachPass. “Vanpools work great for commuters who travel 20 or more miles to work,” said Shawn. Exact monthly cost depends on the number of people in the vanpool and the distance traveled.  Although the vans cannot be driven for personal use on the weekends, they can be used to run errands during the workday.

One challenge of vanpooling is finding other commuters who reside in the same proximity, work near each other, and keep the same hours. However, technology makes it easier to find fellow commuters. Both Rideshare by Enterprise and Georgia Commute Options maintain large databases of commuters looking for rides and vanpools with available seats. Commuters are often reluctant to join a vanpool because they are concerned about getting home in case of an emergency. “But you are not stuck,” said vanpooler Vanessa. Both Rideshare and Georgia Commute Options offer programs that offer free rides home for unexpected events.

For more information about vanpools, or to have a representative come to your office, contact Perimeter Connects or Rideshare by Enterprise.
Pictured in the photo are van poolers Sharon Busby, Irene Laschuk, Lars Nordin, Vanessa Jones.