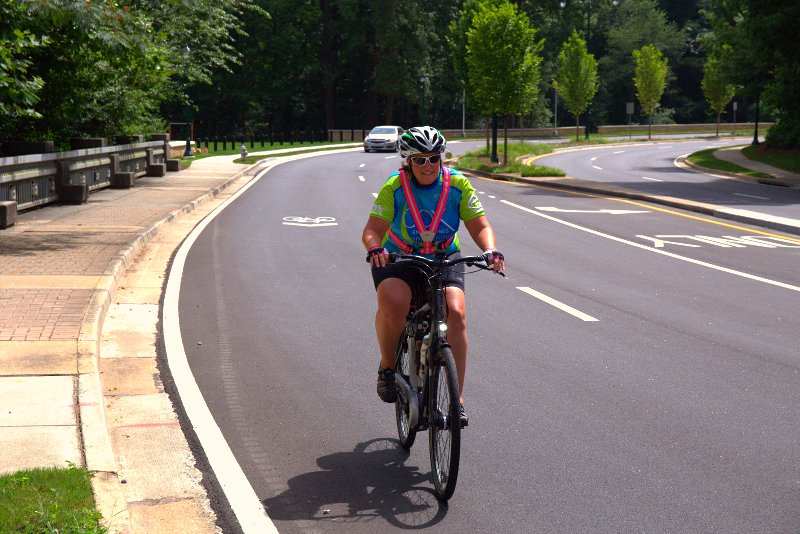 Every day, Lauren Ruiz joins thousands of other commuters trying to make their way through the congested morning rush hour to get to her office in the Perimeter area.

Lauren is not your average commuter. She bicycles the six and a half hilly miles from her Dunwoody home to her Lake Hearn office. “In the morning, it takes me about 28 minutes to bike to work, the same as driving. Coming home takes the same amount of time by bike, but by car it’s an hour and 15 minute commute. It is so frustrating idling in traffic. I’d rather be on my bike.”

Lauren, a Vendor Manager at Cox Communications, uses the gym in her office building to shower after her ride. “The locker room is stocked with shampoos and towels, and I have a locker. It’s easy.” The building also has bike racks in the secure parking deck. “Cox Communications is big about being green. They promote cycling, carpooling and transit.” This year, Lauren will ride in the Bike MS event, which is sponsored by Cox Enterprises.

Lauren considers herself an avid cyclist who used to ride 200 miles a week. She has not let bad knees, including a knee replacement, slow her down much. For her commute she uses an e-bike, a bicycle with an electric motor that supplements the pedal power. “It helps flatten hills into inclines” which makes the commute more manageable.

This confident city cyclist has also become a community activist, helping to advocate for better bike infrastructure. “I give the commuter perspective, which can be different from recreation riders.”

Lauren says the best thing about commuting by bicycle is that it’s empowering. “I can say, I got here by own two legs. That’s pretty powerful.”